Back to Poet Laureate Home

Most Holy Father, we know and from the chronicles and books of the ancients we find that among other famous nations our own, the Scots, has been graced with widespread renown. It journeyed from Greater Scythia by way of the Tyrrhenian Sea and the Pillars of Hercules, and dwelt for a long course of time in Spain among the most savage peoples, but nowhere could it be subdued by any people, however barbarous. Thence it came, twelve hundred years after the people of Israel crossed the Red Sea, to its home in the west where it still lives today. The Britons it first drove out, the Picts it utterly destroyed, and, even though very often assailed by the Norwegians, the Danes and the English, it took possession of that home with many victories and untold efforts; and, as the histories of old time bear witness, they have held it free of all servitude ever since. In their kingdom there have reigned one hundred and thirteen kings of their own royal stock, the line unbroken by a single foreigner.

The high qualities and merits of these people, were they not otherwise manifest, shine forth clearly enough from this: that the King of kings and Lord of lords, our Lord Jesus Christ, after His Passion and Resurrection, called them, even though settled in the uttermost parts of the earth, almost the first to His most holy faith. Nor did He wish them to be confirmed in that faith by merely anyone but by the first of His Apostles - by calling, though second or third in rank - the most gentle Saint Andrew, the Blessed Peter's brother, and desired him to keep them under his protection as their patron for ever.

The Most Holy Fathers your predecessors gave careful heed to these things and strengthened this same kingdom and people with many favours and numerous privileges, as being the special charge of the Blessed Peter's brother. Thus our people under their protection did indeed live in freedom and peace up to the time when that mighty prince the King of the English, Edward, the father of the one who reigns today, when our kingdom had no head and our people harboured no malice or treachery and were then unused to wars or invasions, came in a guise of a friend and ally to harass them as an enemy. The deeds of cruelty, massacre, violence, pillage, arson, imprisoning prelates, burning down monasteries, robbing and killing monks and nuns and yet other outrages without number which he committed against our people, sparing neither age nor sex, religion nor rank, no-one could describe nor fully imagine unless he had seen them with his own eyes.

But from these countless evils we have been set free, by the help of Him who though He afflicts yet heals and restores, by our most tireless prince, King and lord, the lord Robert. He, that his people and his heritage might be delivered out of the hands of our enemies, bore cheerfully toil and fatigue, hunger and peril, like another Maccabaeus or Joshua. Him, too, divine providence, the succession to his right according to our laws and customs which we shall maintain to the death, and the due consent and assent of us all have made our prince and king. To him, as to the man by whom salvation has been wrought unto our people, we are bound both by his right and by his merits that our freedom may be still maintained, and by him, come what may, we mean to stand. 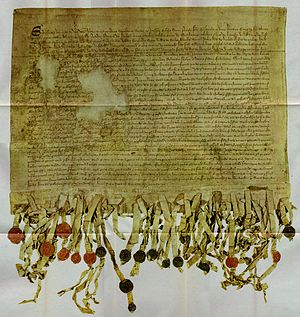